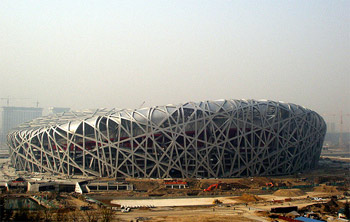 The National Stadium, as the main track and field stadium for the 2008 Summer Olympics, is dubbed the "bird's nest" because of its innovative grid formation.

The twig-like structural elements and the bowl-shaped roof are the masterpiece of the project, yet they pose great challenges for technicians and workers to make the building stand on its own feet.

The stadium can seat as many as 91,000 spectators during the Olympics. It is located right next to the Beijing National Aquatics Center.

The ground was broken on Christmas Eve December 2003, and construction started in March 2004.

It was built with 36 km of unwrapped steel, with a combined weight of 45,000 tonnes. The stadium has some 11,000 square metres of underground rooms with waterproof walls. 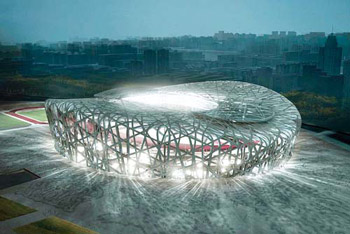