Visitors to China might be amazed at the many souvenir shops that offer seal-engraving, often creating the seals within 15 minutes. Many foreign businessmen used to signing their names are astonished to find that their Chinese counterparts prefer the use of seals.

To the Chinese, a seal was a symbol of power for many centuries. The emperor's seal, called Xi, showed his authority over his subjects. Governments at different levels all issued orders endorsed with official seals.

Traditional Chinese painting combines painting techniques, calligraphy, engraving and the art of arrangement in a limited space. A master seal engraver must combine all of these skills. He or she must be able to write in different Chinese script styles artistically and arrange characters perfectly.

A perfect seal is determined by an engraver's speed and the strength of his wrist and fingers, as well as the tools he uses.

Nowadays, seals are still widely used, and the art of seal engraving has become more popular than ever before. 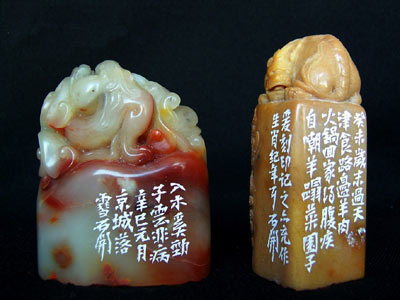