Embroidery is an old, well-established art form in China for both men and women.

Originally, embroidered items included robes, theatrical costumes, purses, shoes, spectacle cases, banners, altar cloths and more. Some ancient pieces were so intricate that they required several years of work by five to six people to complete. Embroidery was also used to denote rank or station through decoration on silk clothing, silk flags and banners. Gradually, embroidery developed into a pastime for wealthy ladies. Many members of the court were renowned for their intricate work. 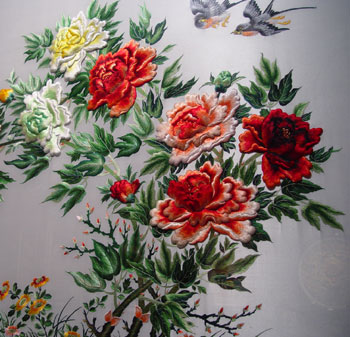 The most common stitches used by the Chinese are the satin stitch (which is classified into long and short), the French knot, the stem stitch, the couching stitch, the chain stitch and the split stitch.

The satin stitch is particularly exquisite in its fine detail while the use of gold thread for the French knot, a favorite of the Chinese, is characteristic of their work. In the past, sometimes light material like gauze and paper were embroidered to demonstrate the fineness of the work.

It is difficult to pinpoint when embroidery first was practiced in China but based on archeological excavations of tombs it at least dates back to the early Han dynasty based near Lake Baikal in the early second century B.C. In addition, any Tang embroideries continue to be preserved both in China and in Japan.

There are also many fine pieces of embroidery from the Sung dynasty. We know from historical records that the Sung Emperor Hui Tsung (1101-1126) established an embroidery bureau called the "Wen Hsiu Yuan". Many of the finest pieces from this dynasty were copied during the Ming and Ching periods.

Chinese literature records the names of many famous embroiderers. Among these are Kuan Fu-jen, the wife of the painter Chao Meng-fu and the ladies of the Ku family in Shanghai who lived during the Ming period. The painters Tung Ch'i-ch'ang and Wen Cheng-ming and more recently Sh'en Chou, who died in 1910, are all considered great embroiderers.

Embroidery is still practiced in many sections of China. Suzhou, in particular, is well known for the quality of its work. However, few embroiderers today can match the precision, art and charm of the work produced in China’s past.