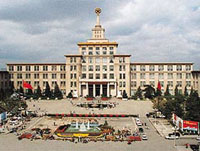 The museum occupies a total area of 60,000 square meters. After passing through the lobby, one comes to the central exhibition hall, which contains over 500-odd photographs and more than 1,000 mementos of the Chinese revolution led by Mao Zedong over the course of half a century.

On the eastern side of the main building, the three floors are taken up by specialized halls, the titles of which are in the calligraphy of Chen Yi, who penned them at the request of Zhou Enlai. The first floor is devoted to the Second Revolutionary Civil War (1927-1937), the second floor to the War of Resistance Against Japan (1937-1945) and the third floor to the Third Revolutionary Civil War (1945-1949). The exhibits in these three halls depict the 28 years from the founding of the Chinese Communist Party in 1921 to the establishment of the People's Republic of China in 1949. 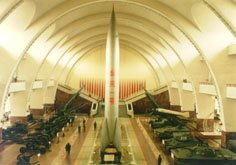 They treat the organization of the Party and the army, the establishment of rural revolutionary bases and the seizure of state power by the armed forces. Included in the more than 5,000 exhibits are an oil lamp used by Mao Zedong during the Jinggang Mountain struggle, and photographs showing Mao writing his essay "On Protracted War" and delivering his famous speech at the celebration of the founding of P.R. China. Also on display are photographs of Zhou Enlai, Zhu De and other veterans of the revolution along with a collection of their personal effects. Sections devoted to the People's Liberation Army and the masses show the importance of their participation in the revolutionary wars. There is also a special section devoted to noted revolutionary martyrs such as Norman Bethune and D. S. Kotnis. In the western wing, the first floor exhibition hall contains a general exhibition while the second and third floors house a display entitled "The Protection of Socialist Revolution and Construction." The outdoor plazas on either side of the central hall exhibit representative weapons used by the People's Liberation Army and the weapons captured from the enemy during various periods of the revolutionary war.

Bus route: Underground railway, and bus Nos. 1, 4 and etc, get off in the station of Military Museum.